Using the NEO Mobile Suite significantly simplified the extremely complex processes at LÖWEN-CROWN-SERVICE. This not only makes work easier for the technicians, it also increases service quality. 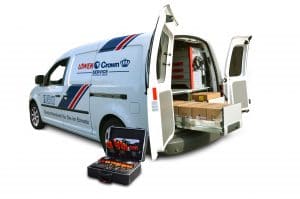 More than 100 technicians across a total of 21 branches throughout Germany ensure that the LÖWEN and Crown games machines work perfectly, either on their 5,000-odd customer sites or 300 of their own ADMIRAL amusement arcades. In total, the LÖWEN-CROWN-SERVICE looks after several tens of thousands of machines, which are all leased.

Before the introduction of the mobile workforce management system, the whole service process was very paper-heavy and far from ideal. It all began with the service request. As there were no electronic forms, this generally required a telephone call direct to the branch. There, the order was entered manually into the SAP system, printed out and given to the service technicians on paper. They would then load their vehicles with all the materials which could be required for the order, normally significantly more parts than actually needed. But it was still not uncommon for an important part to be missing, which meant more travel. “With all these processes, our service centre was largely left out in the cold, as the communication between the centre and the branches was via telephone: and e-mail and therefore fairly convoluted. So not only was there a lack of transparency. It was also impossible to determine key indices,” explains Roland Kellner, Head of LÖWEN-CROWN-SERVICE, describing the initial situation. 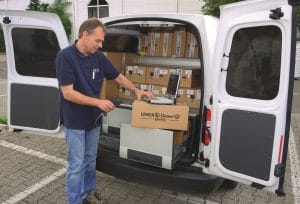 Because the games machines are generally leased, the associated processes are more complex than in other service organisations. Different guarantee terms for different brands and models must be taken into consideration. The parts system used for materials management, involving a complex parts return system which sometimes differentiates between new and replacement parts, also represented a real challenge for the future IT system.

One of the aims of the “Mobile Workforce Management” project was to optimise the loading of the vehicles in order, on the one hand, to avoid unnecessary trips and also to optimise stock management as a whole. At the same time, the new solution needed to be integrated into SAP, without changes in format if possible, in order to be able to actually benefit from the mobile workforce management system. The wealth of requirements and the fact that not only service but also materials management and IT were closely involved in the evaluation process led to a decision not to rush into things.

“We decided to first answer three questions as part of a preliminary study: What needs to be done to make our service organisation modern and contemporary? What will it all cost us? And what will the return on investment be?” explains Roland Kellner. This stock-take was carried out with external support from an Axians specialist. “When it came to selection, it came down to specialist know-how and the fact that the consultant needed to be convincing for us,” explains Roland Kellner.

Preliminary study as project base

As part of the preliminary study, all service processes were analysed carefully over a four-month period from the different perspectives of the three departments. There was plenty of discussion as, for example, service and materials management had very different views on the question of loading the vehicles. “While we want to keep a wide range of parts in stock so our technician are best prepared for every situation, materials management was in favour of a more streamlined system to keep stock levels low,” is how Roland Kellner describes one of the points under discussion. However, the discussions were very constructive and, at the end of the day, there was a specification that all departments were happy with.

On this basis, an extensive selection process was initiated which concluded with a decision for the NEO Mobile Suite. This was not only down to the functionality of the solution, but also because the SAP team at Axians supported the upstream project phases, including the optimisation of the SAP CS customer service module which was already in use and the introduction of the SAP MRS module for service planning. Only then was the NEO Mobile Suite introduced. “We took a consciously sequential approach to these phases. Although this meant the project as a whole took a little longer, the result was a system in which all the processes across the whole service organisation were standardised and fully integrated into SAP,” explains Roland Kellner in summary.

Particular attention was paid to kitting the technicians out with mobile devices. While in the field, they need to be able not only to record times and materials or the customer’s signature on the touch screen, they can also transfer a software update to a device via USB. The company opted for Panasonic Toughbooks, as they combine the benefits of both tablets and notebooks and are also virtually indestructible. “Another decisive factor was the views from the technicians, who we gave three different devices from different manufacturers for testing,” adds Kellner.

From home straight to a service call

The process of loading vehicles was turned completely on its head. Wherever sensible, the vehicle, normally a VW Caddy, is loaded overnight by a service-provider. Instead of having to go to the branch, as they previously had to do on a regular basis, technicians can head straight from home to a service call in the morning. They can also carry out other tasks from their home office, which makes things massively easier for the individual technicians. “Although some of the employees initially had reservations about the mobile devices or data entry using a touch-screen, overall, they quickly noticed that the new technology had lots of benefits for them,” reports Roland Kellner. In order to increase acceptance on a long-term basis, the aim is now to improve user-friendliness even further, even though this is not always easy given the complex requirements at LÖWEN ENTERTAINMENT. The isolated concerns that the new technology would result in job cuts also proved unfounded. “On the contrary: it has allowed us to increase our range of services and are currently taking on new staff,” adds Kellner.

An investment that pays off 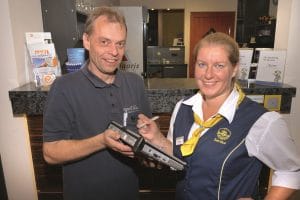 With the new system, the branches and the service centre are working on the basis of the same information, so it now makes no difference whether the order is received locally or through the centre. Thanks to the close integration of the NEO Mobile Suite, all data is available quickly in SAP. This means processes can be planned and controlled based on robust key indices. According to Roland Kellner, the project objectives have been achieved, although of course there is always potential for improvement. “We can also provide a positive answer to question 3 in the preliminary study: the investment into the system has paid off,” he reports in summary.