Viessmann has replaced all paper correspondence with the NEO Mobile Suite. This has led to optimised processes and accelerated the back office. The ease of use has also allowed maintenance work to be carried out in an orderly fashion.

The Viessmann Group is one of the world’s leading manufacturers of heating, industrial and cooling systems. The family company, which was founded in 1917, has 11,500 employees and records a group turnover of 2.2 billion euros. 56 percent of turnover comes from abroad. As a family company, Viessmann sets great store by responsibility and sustainability, which are firmly anchored in the company’s principles. The Viessmann complete range includes individual solutions with efficient systems with power of 1 to 120,000 kilowatts for all applications and energy sources.

Transparency and flexibility with the NEO Mobile Suite

Viessmann has also noticed increasingly demanding requirements for technical customer service. After all, in residential, work and industrial areas and in cooling technology, for example in the food industry, it is critical that systems work reliably at all times. Sensibly scheduled maintenance intervals and short maintenance times also help, as does quick response on-site in the event of problems. This requires transparency and flexibility in service planning, but also a consistent workflow for order processing, execution, logging and billing.
In order to achieve this, in 2011, the then nearly hundred-year-old family company began standardising all processes for the international technical customer service from an operational and accounting perspective in NEO Mobile Suite and integrating them into their SAP ERP system (EAM/PM). “Our decision was primarily based on Axians’ excellent skill-set and proven SAP expertise,” explains Andreas Schwertmann, Head of Process Organisation and Logistics at Viessmann. Other reasons for going with the mobile specialists include the seamless SAP connection, the simple implementation processes and the fact the solution could be localised into multiple languages. 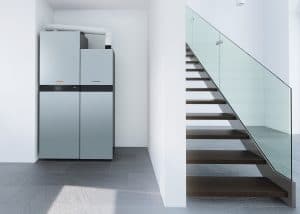 Given the size of the company, which has 11,500 employees in 74 countries around the world, the decision was made during the planning phase of the project in 2010 that the mobile solution would be rolled out gradually, i.e. each country at a time. Andreas Schwertmann: “For reasons of better manageability, we started in 2011 with our Czech company, with around 20 field staff. Together with the Axians developers, we were able to gather valuable experience, which we fed into the subsequent changes and country-specific adaptations.”

In line with this close development partnership, field customer services for the Viessmann companies in the Czech Republic, Slovakia, Switzerland, Belgium, Holland, Luxembourg and Austria have now been kitted out with the new solution. While factory maintenance at the Viessmain headquarters in Alpendorf and some branches in Germany are already working with the NEO Mobile Suite, the system is due to be rolled out nationwide in Germany in 2016. As before, the experienced project team will make the changes on live systems over the summer months, which are traditionally quieter, so that a total of around 350 service technician will be using this tool for their everyday work as of the end of 2016.

High levels of acceptance among the technicians, even from the international branches, is down to two ergonomic reasons, according to the project manager at Viessmann: “On the one hand, the clever user navigation makes using the application itself easier, and, on the other, the wizards help ensure maintenance work is carried out properly and in the right order. Whether it is a small heating furnace or a very large industrial system, our service employees have all the relevant components for working on your equipment, as a kind of mobile SAP system.”

As well as information and data on all orders and notifications, the solution also provides plans and analysis functions and supports documentation, an aspect which is especially important in relation to guarantee claims. The system also includes navigation, mobile printing and a barcode reader. According to Andreas Schwertmann, the ability to localise NEO Mobile Suite also stood in its favour: “The different language versions are an enormous help for our maintenance technicians when they are getting used to the system. After a half day’s introduction and half a day of practical exercises, the NEO tool was established as a standard working instrument among our field employees. Viessman is now using the NEO Mobile Suite 7.1 in German, Czech, Slovakian, Dutch, Italian and French. Further localised versions will follow before the end of the cross-company roll-out in 2018.

Optimised processes, accelerated back office Because of the international Viessmann product specifications, the service planning and process steps for the service work on site are broadly identical. Appointments must be agreed and timings kept to. On site, is is a question not only of carrying out the requisite steps safely and in the right order, but also of following this up with detailed reports for documentation purposes, whether it is a case of regular maintenance or one-off repair work. Once the technician has completed all the defined processes, in the best case scenario it is transferred directly to accounts so the invoice can be produced promptly. “This is where the NEO Mobile Solution scores highly with the provision of product information and the definition of individual maintenance and repair steps,” explains Andreas Schwertmann. “This means the technician no longer has to produce a report afterwards on paper, as all the processing steps have been worked through and documented, and thus have already been recorded.”

Saving the country-specific billing, tax and accounting arrangements requires a little more effort. For example, individual billing increments by minutes, quarter hours, half hours or whole hours need to be set up for each country, alongside expenses bills for the technician and country-specific value added tax regulations. Based on its previous experiences, the project team put together what they called a blueprint, which was a method of visualising service process that, unlike other process maps, also incorporates the customer and its perspective on the process. Andreas Schwertmann: “With this structure, we managed to reduce the introduction times for the mobile solution in each country enormously. After a period of installation and technical adjustment of the NEO Mobile Suite on all devices, which lasted around one to two months, the stakeholders could start to practise and experiment. Depending on the country, it takes between four and six months to complete the fine tuning and enable all functionality to be used in full.

Andreas Schwertmann’s summary of the project so far is very much positive: “With five years of experience of the solution, we have met all the specified objective as planned.” The previous changes in format have been reduced, so that not only is manual revision work in the back office down, but the quality of data is also up. The Viessmann branches also carried out a cross-departmental standardisation of the service processes to allow better workload planning for their field team. “I am sure that, thanks to the shortening and optimisation of the billing times we have achieved so far, we will be able to implement the planned company-wide consolidation of the Viessmann business processes by the end of 2018.”

Andreas Schwertmann has been more than satisfied with the close cooperation with the Axians developers and project managers over the last five years: “Our development partnership was and is a really positive win-win project. The wizard function on the NEO Mobile Suite, which is now standard, is based largely on the experience gained in this project. In a nutshell, thanks to their excellent SAP know-how and their many years of practical experience, the experts at Axians were not only a professional sparring partner providing valuable suggestions in discussions, but also had a hand-on mentality which meant our change requests were implemented quickly.